Note: This was originally published on my Blogspot blog on November 9, 2014, but has been updated when posted here.

With that said, I often get commended by both atheists & theists for the way I conduct myself during these debates. I try to remain calm & polite, even in the face of absurdities, insults & obvious trolls. I don’t always succeed, but obviously, I don’t fail often enough for it to affect people’s opinion of me.

I admit that I take some measure of pride in the way I go about being a “Twitter atheist”.

None of this answers why I debate theists though, not sure why I mentioned it, other than setting the stage perhaps. Ah well, here’s the meat of this post:

Many probably assume I’m trying to “convert” the person I’m debating to atheism. This is not the case at all. I don’t suffer from any grand delusion that I am likely to convince my debate opponent to suddenly see my side & instantly declare themselves atheist. I’d actually be dumbfounded if that ever happened. I do hold some hope that they might go away with a few things to think about—that I may have successfully planted a couple “thought seeds” that might, over time, grow & develop.

Still, this small hope of planting “thought seeds” in my debate opponent is by no means the main reason behind my prolific debating habits. My true target is the audience; especially any theists that might read my debates. While a person is actively involved in a debate, it’s difficult to truly absorb the other person’s points as they are typically focused on how to counter the last point (or at least how to dodge, deflect or avoid a point).  This isn’t the case with the audience. They are detached from the heat of the debate and in a better position to consider the more nuanced aspects of the points being made by both sides. It is far easier to plant “thought seeds” in the audience’s minds because of this & so there is a greater chance of them going away with a modified point of view or some new ideas to research & think on.

The audience is also an important reason I strive to remain calm, polite & rational. To me, when I watch a debate & I see someone responding angrily, or abusively, they instantly lose some credibility with me. This is doubly so when their opponent responds with calmness. I’m more inclined to listen to a calm person than an angry one & so I try not to be the angry one.

I’m aware of the “different strokes for different folks” philosophy that says no one debate tactic will reach every audience member, so I’m not trying to claim my style is the best style, only that it is the style I prefer because it resonates with me; based on the number of compliments I get, it seems to resonate with a lot of the audience too.

This means that I actually like it when my debate opponent starts getting irrational & presents crazy assertions. It makes my job easier since it ends up contrasting so sharply with my calm, polite responses. In those cases, I like to think that I appear to be the saner & more rational one & thus viewed as more credible with my arguments more worthy of deeper consideration.

Another reason I do what I do is for other atheists. To let them know they aren’t alone, help them learn the sound arguments against God and generally entertain them.

The last reason I debate a lot is simple—I just flat out enjoy it. I find it mentally stimulating & the subject of religion fascinates me. It’s such a free-for-all subject where literally any assertion can be made, so you have to be ready for some odd assertions at times, which keeps you on your logical toes. 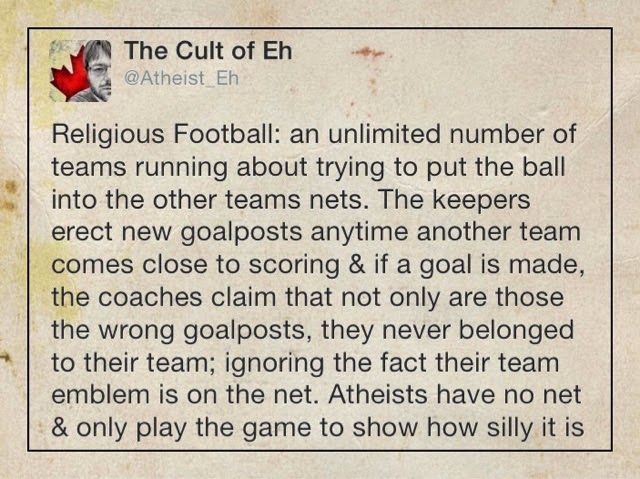 Some people spend their spare time watching “Honey Boo Boo”, I spend mine debating people about subjects that I feel have some actual meaning in our world.

So what do I hope to achieve? What’s my end game? There’s s few.

1) I do hope I can help theists break the yoke of religious dogma. I honestly feel that society would be better off if Religion died a natural death by Education. While it won’t solve all of humanity’s problems, it will remove one reason for people to hate each other. There are also some unique atrocities that require Religious motivation, such as blasphemy laws, killing “demon possessed” people, killing apostates & child indoctrination to name a few. With that said, I will fight against any calls to ban religion. Thought policing is impossible & immoral.

I’m aware some find great comfort in religion much like, in my opinion, a child does from their Special blankie or teddy bear. I am NOT looking to rob anyone of their Religious security blanket or emotional crutch. Sounds harsh to describe it that way, but that’s ultimately how I see religion. As such, I generally do not seek out theists on Twitter just as I don’t seek them out in real life to debate. However, if a theist is re-tweeted into my Timeline, tweets me first or if they tweet about atheism, I have no qualms engaging with them.  The same is true if people in real life choose to bring up religion—I will tell them my honest thoughts.

2) I hope to be a good ambassador for atheism to help support #1 by showing theists that their stereotypes are wrong & you can be good without God.

3) Related to #2, I also wish to be a good role model for other atheists, especially the younger ones. Civility seems to be underrated in today’s cyber-society.

4) I hope to teach other atheists some of the compelling reasons why I feel the gods don’t exist. Perhaps change a few “lack of belief” atheists into full-on “Creationist” Atheists. 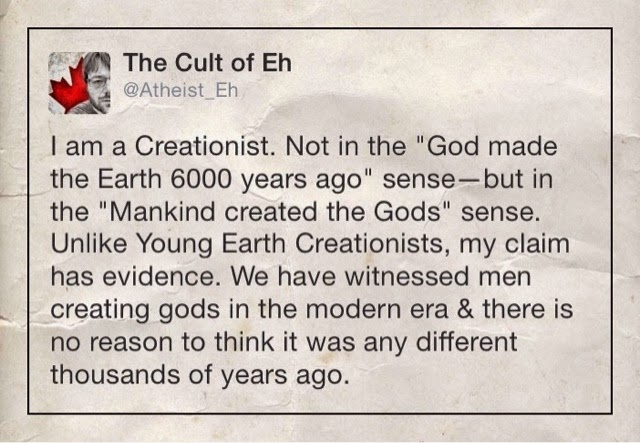